My name is Danyliuk Vladislava, I am from the Kirovohrad region, an urban-type settlement of Pobuzhskoye. I am currently in El Salvador, Bahia, Brazil.

How did you get to Brazil?

On Instagram, I saw a post from the Creative Fellowship that the Neojiba program, founded by Brazilian conductor and pianist Ricardo Castro, provides assistance to Ukrainian musicians during this difficult time for Ukraine. After reading the terms and conditions, I applied and, here I am.

When did you apply?

Around the beginning of March. And on April 1st, I was already in Brazil.

Did you encounter any difficulties in the process?

At first, my parents were not against it, but after my application received a positive decision, they resisted for some time. However, eventually they were convinced, after hearing from other Ukrainians in the program that everything was organized and safe here.

Tell me more about your trip.

First, I went to Poland, where I was met by volunteers who helped me complete the necessary documents and get on the plane. In El Salvador, I was met by a couple of Ukrainians who assisted me, including with the language barrier. When I flew to Zurich, my knowledge of English allowed me to communicate with others. But even on the flight to Sao Paulo, English did not help much, because most people understood only Portuguese.

What did you do in Ukraine before you left?

I studied at the Odessa National Music Academy named after Nezhdanova, but after the war began, I was forced to leave the city, because of the threat of bombing and occupation. After returning home, I became a volunteer – I wove camouflage nets for the army, and took part in providing medicines to the residents of the village.

Why did you choose Odessa?

I love this city, the people are very positive and it has a particular, I would say, light atmosphere. Unlike in Kiev, where everyone is always busy and very serious.

Have you ever participated in Creative Fellowships before?

I first took part in the program in 2018, when I was seventeen years old. But at that time I was in third place and didn’t make it to the international camp in Salzburg. Since the program was for young people aged 14 to 18, I decided to take part in it again the following year. Although I failed to win again, the program organizers called me and offered me an audition with Evamaria Wieser. Of course I agreed, because in my opinion it was a great opportunity.

What do you think was the reason for the failure of your first attempt?

As I was told, I was already in college at that time and was considered a more qualified musician. Almost professional. The program is designed to identify and develop talents, so to speak, for beginners.

After visiting Salzburg, what did you learn from your experience?

The main thing is the need to speak a foreign language. First of all, English. After listening to Ms. Wieser, I received some tips for further development. And although my teacher did not agree with them, I followed the advice of Ms. Weiser. She has a high authority in the field of opera art. I continued to attend opera workshops and met Helena Hagis, a teacher at the Munster Conservatory from Germany. I studied with her for more than a year, which gave me the skills to enter the Odessa Conservatory. I am very grateful to her for this opportunity.

In addition, participation in the Creative Fellowships program contributed to my personal development. The fact is that before participating in the program, I was not very sociable, and thanks to participating in the program, I managed to overcome this. Communication with students from other countries gave me a new perspective, knowledge of different cultures, which has proven very benefial, especially now that I am in another country. I am quite often asked about Ukraine and its culture.

In my opinion, the Creative Fellowship program is very protective of its participants and this is very good. It can be called our fairy godmother because it turns dreams into reality. Even if you do not come first in the program, this is not a reason to lay down your hands and quit, you understand that perhaps next time you will do better.

What advice would you give to current and future members of Creative Fellowships?

Taking part in the program is very helpful. First of all, this is the process of acquiring experience. As my mother says, if this doesn’t work out, it will work out another time. Just try. Learning English and developing creative abilities will all benefit you in the future. A simple example is when I was preparing to participate in the program – I studied English, now being in another country – I am learning Portuguese. I want to take the new positive experience that I gained in Brazil back to Ukraine. Therefore, it is absolutely a good thing to take part in the program. Moreover, as far as I know, the organizers of Creative Fellowships have launched another program for designers.

How is your life in Brazil?

I live in a guest house of a local music center, in a room with another female student from Ukraine, and another Ukrainian woman lives nearby. The house is located near the ocean, which is visible from the balcony. For Ukrainian musicians, there is a charity program of assistance founded by Ricardo Castro, aimed at protecting them from the affects of war. In particular, musicians have the opportunity to continue their creative development. Unfortunately, there is no academic vocal studio here, but I have the opportunity to maintain my skills in a choral singing studio. This is due to the fact that the Castro school is more focused on training in the class of instruments for symphony orchestras. For other students, there is another Neojiba program funded by the state of Baia. It provides the opportunity to engage in music for teenagers and young people from very poor segments of the population.

Students have the opportunity not only to study at the center for free, but can also act as music teachers for children and even receive a fee for this.

Accommodation and training for Ukrainians is free, they even offer funding. Moreover, if the training interferes with our studies, we can work as musicians, but our poor knowledge of the Portuguese language is a hindrance. Despite the language barrier, we manage to communicate with other residents, but it can be challenging when visiting the city.

And what are your impressions of the city and the country as a whole?

I really like the local architecture, very similar to Lviv or Salzburg. The abundance of abandoned houses is surprising. Our friends, Ukrainians who have already lived here for several years, explained that wealthy residents, once the house begins to need repairs, simply move to another house. This is strange to me.

I also love the nature. Sometimes you get the impression that you are somewhere in the jungle, and not in the city. Only it confuses me that everyone has already seen Mika the Monkey, but I haven’t yet (smiles). These are the kind of dwarf monkeys that can be found even on the streets of the city.

Most people are very friendly and. are willing to share local rules and customs with you and warn you about dangerous actions. I already have friends, both Ukrainians who moved here after the war, and local residents. In general, people show great interest in us, perhaps this is due to the events in Ukraine and the local media. But Brazilians are more concerned about the events that are taking place in their own country, so they are surprised when they learn that there is a war going on in Ukraine.

What are your plans for the future? And how does the war affect them?

I hope that the war will end quickly and I will be able to finish my studies at the conservatories. Our last plan was to stage the Opera Mikado at the conservatory. It was meant to be a series of performances with various excerpts in the theater, Philharmonic Hall. But these plans were thwarted by the war.

In the future, after graduating from the conservatory, I plan to work with an Opera House.

When I went to Brazil, I thought that I would only study, but I was lucky enough to meet with caring people who raised funds to help our country. Given that we are musicians, we plan to earn money to help with our performances. Therefore, for now, in addition to training, we will engage in volunteering and fundraising.

I have already had one concert with the orchestra, but my dream is to perform together with Ricardo Castro. It would be a great honor for me to perform with such a famous man. 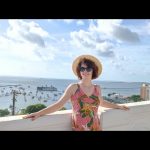 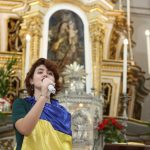 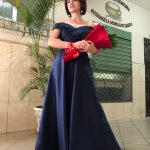 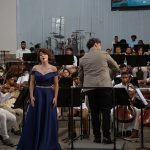 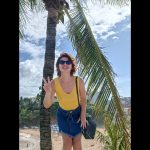